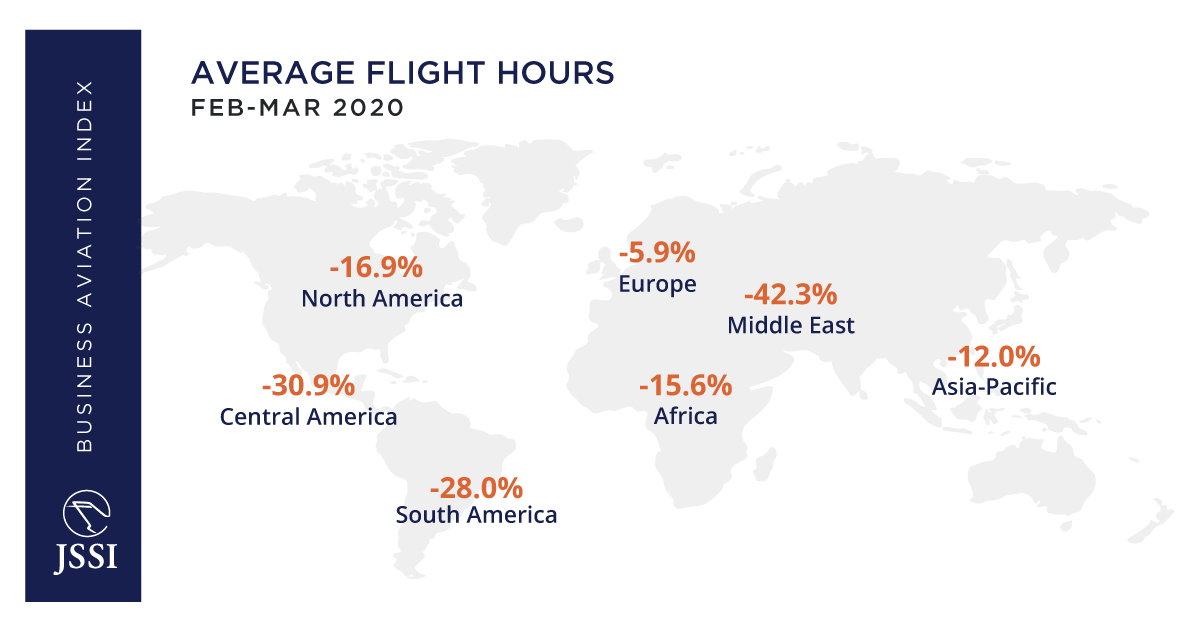 CHICAGO, Apr. 28, 2020 – March 2020 marked a tipping point in business aviation, when the full impact of the COVID-19 crisis was felt industrywide, according to Jet Support Services, Inc. (JSSI). This assessment is supported by the company’s latest quarterly Business Aviation Index publication, released today.

The Index reports on the global flight activity and utilization of business aircraft, including jets, turboprops and helicopters. JSSI’s data reveals that aircraft flight hours in March were 12.9% lower than in February and were the lowest recorded flight hours for the month of March since the Great Financial Crisis. Hours flown in the first quarter of 2020 were down 5.7% when compared to the same quarter last year.

“As expected, March flight hours declined steeply in the second half of the month. As the world economy began to shut down, so did business jet travel,” said Neil Book, president and CEO of JSSI.

With the majority of the world’s business aviation fleet based in North America, the sudden drop-off in March flight activity was particularly apparent in this region. There was a 16.9% reduction versus February and activity for the month was 25% lower than March 2019.

Overall, Europe was a bit of an anomaly in March, as the region only recorded a 5.9% drop in activity versus February, but showed an increase of 5.1% over March 2019. This surge can be attributed to the frenzy of business aircraft activity in the region that preceded the impending closure of international borders and almost total shut down.

JSSI’s flight hour data by aircraft type reflects that the most substantial drop in March 2020 activity occurred for large-cabin jets, with the cabin type recording a 15.5% decrease in flight hours versus February. This is believed to be a result of the virtual halt for long-range, cross-continental business jet travel caused by the coronavirus emergency during the second half of March. In contrast, less pronounced utilization declines in other aircraft types were likely to have been driven by pockets of accelerated activity for domestic charter operations, air ambulance, and medical supply transport to provide connectivity and support in the wake of this crisis.

JSSI’s utilization data provides early indicators and useful insights into the state of current economic conditions globally. Given that the major slowdown in business aircraft travel occurred in mid-March, forthcoming results from April and the remainder of the second quarter will provide a larger data sample to assess the true impact of COVID-19, particularly in North America and Europe.

“Based on the real-time data available to us, we expect April flight hours to be down in excess of 75%. We expect to see a very modest increase in the month of May from April flight hours, as a number of countries begin to slowly open back up,” added Book.