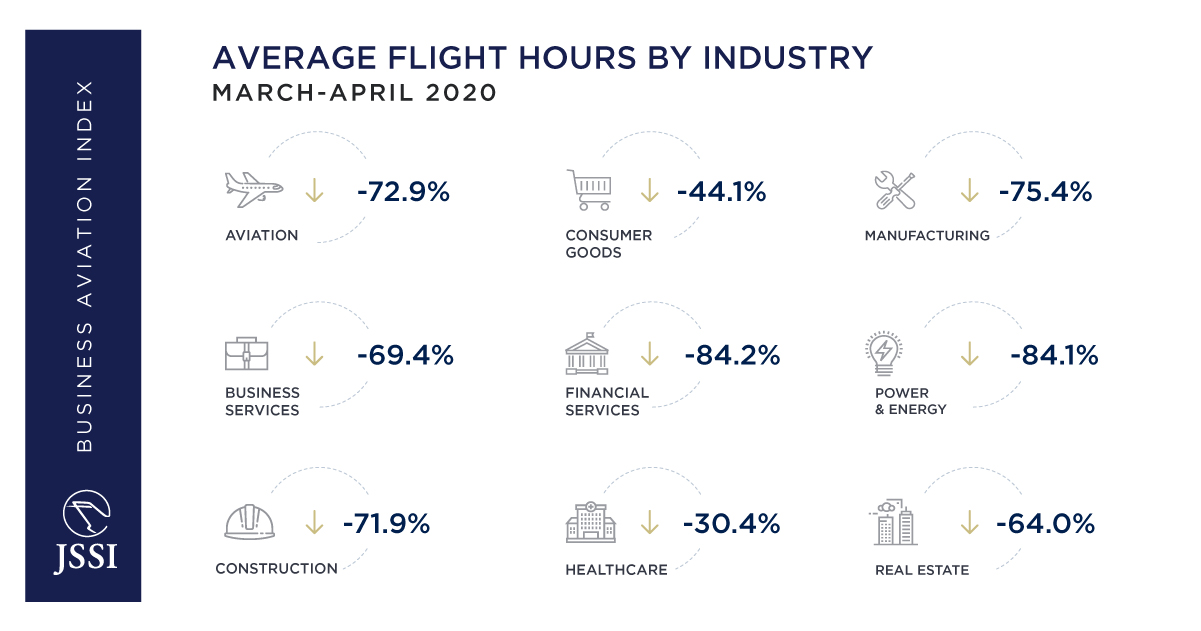 CHICAGO, May 19, 2020 – Business aviation utilization has reached a record low, according to Jet Support Services, Inc. (JSSI), as highlighted by a single-digit monthly flight hour average of 5.9 per aircraft across JSSI’s entire portfolio in April, marking a first for the company. Following its quarterly Business Aviation Index publication, JSSI has released April 2020 data revealing changes in global flight activity and utilization of business aircraft, including jets, turboprops and helicopters between March and April 2020.

The key findings are:

“March flight hours saw the largest decline since the global financial crisis of 2008. April’s flight hours are the lowest we have on record, down more than 75% compared to April 2019 and demonstrating the true impact of global lockdown restrictions and border closures since their implementation.”

“Asia Pacific was the first region struck by COVID-19 and shut down the earliest. As the region has begun to reopen, flight hours in April have had a modest rebound. As a number of countries begin to ease restrictions and borders begin to reopen, we expect to see a slow but steady increase in flight hours worldwide for the month of May. However, we simply do not know how long it will take to get back to 2018 and 2019 levels. The time to market with an effective treatment or vaccine will clearly be the driver of this timeline.”

“In April, the healthcare industry had the strongest flight hours. This could allude to the utilization of these aircraft for air ambulance and medical supply transportation, a trend continued from our Q1 2020 analysis.”

“The largest demographic of business jet owners are males over the age of 60, who fall into a “high-risk” category for COVID-19. I’ve had extensive conversations with clients who’ve said they are going to significantly reduce their flying, because they simply will not be attending conferences or staying at hotels at least for now.

“With that said, we are already seeing a significant number of new users migrating to a wide range of business aviation options, such as jet card, charter, fractional and even outright ownership. For many businesses and individuals with the resources, the health risks associated with walking through a commercial airport with thousands of people and getting onto a commercial flight is simply too great.”